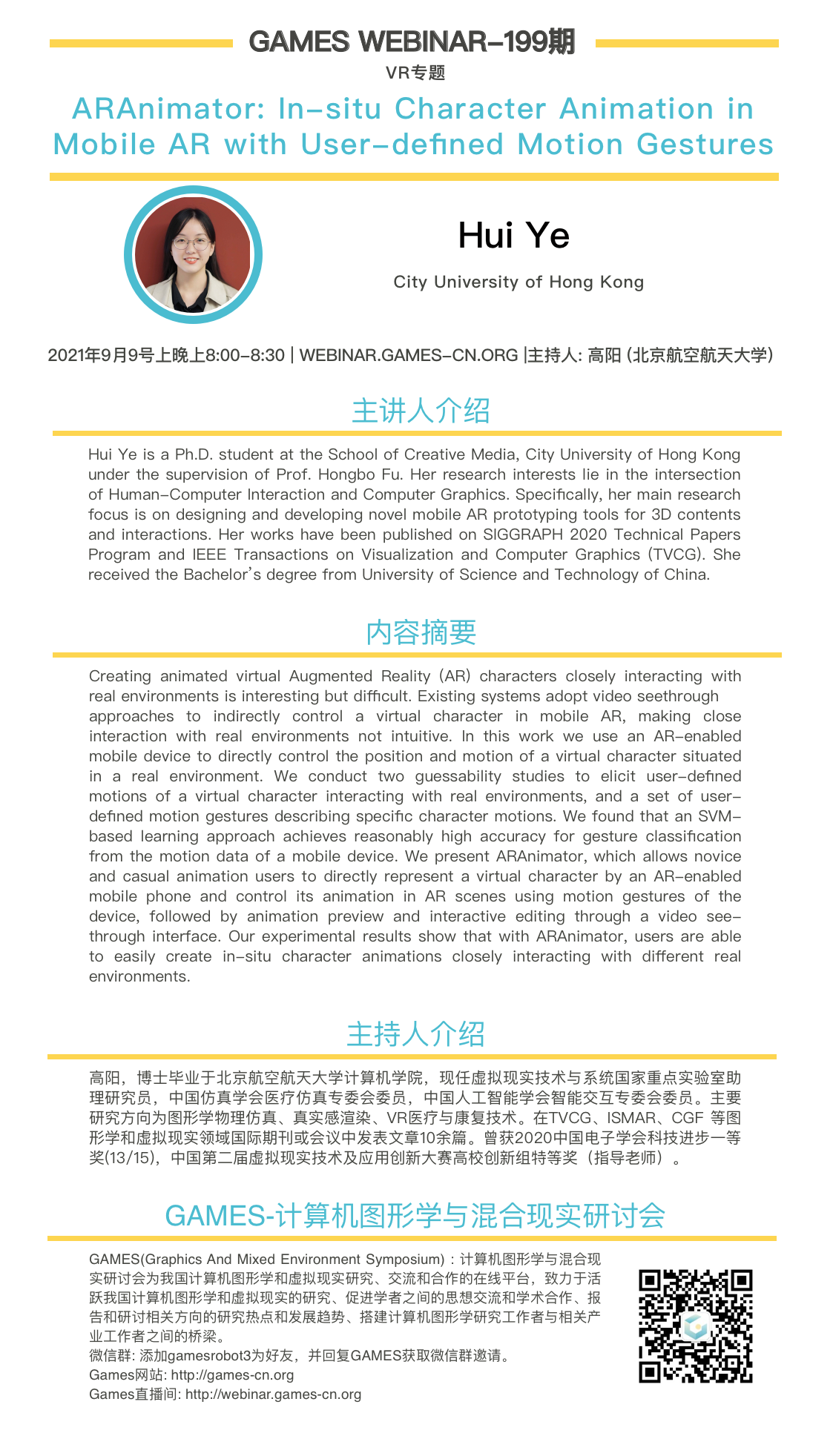 Hui Ye is a Ph.D. student at the School of Creative Media, City University of Hong Kong under the supervision of Prof. Hongbo Fu. Her research interests lie in the intersection of Human-Computer Interaction and Computer Graphics. Specifically, her main research focus is on designing and developing novel mobile AR prototyping tools for 3D contents and interactions. Her works have been published on SIGGRAPH 2020 Technical Papers Program and IEEE Transactions on Visualization and Computer Graphics (TVCG). She received the Bachelor’s degree from University of Science and Technology of China.

Low-cost virtual-reality (VR) head-mounted displays (HMDs) with the integration of smartphones have brought the immersive VR to the masses, and increased the ubiquity of VR. However, these systems are often limited by their poor interactivity. In this paper, we present GestOnHMD, a gesture-based interaction technique and a gesture-classification pipeline that leverages the stereo microphones in a commodity smartphone to detect the tapping and the scratching gestures on the front, the left, and the right surfaces on a mobile VR headset. Taking the Google Cardboard as our focused headset, we first conducted a gesture-elicitation study to generate 150 user-defined gestures with 50 on each surface. We then selected 15, 9, and 9 gestures for the front, the left, and the right surfaces respectively based on user preferences and signal detectability. We constructed a data set containing the acoustic signals of 18 users performing these on-surface gestures, and trained the deep-learning classification pipeline for gesture detection and recognition. Lastly, with the real-time demonstration of GestOnHMD, we conducted a series of online participatory-design sessions to collect a set of user-defined gesture-referent mappings that could potentially benefit from GestOnHMD.

Taizhou is a PhD candidate from School of Creative Media, City University of Hong Kong, under supervised by Dr. Kening Zhu and Prof. Hongbo Fu . His research interest lies in the intersection of Human-Computer Interaction and applied machine learning, in which he is currently focusing on investigating sensing technologies, leveraging deep learning algorithm. Specifically, Taizhou invents and builds new sensing techniques to extract meaningful insight from common sensor data for two purposes: on one head, he creates novel input techniques on mobile devices to provide enhanced and intuitive user experiences. On the other head, he designs and evaluates sensing technology to implicitly understand users’ behavior and surroundings. His ultimate research goal is to make ubiquitous device context-aware and user-aware. Taizhou also have research experiences on VR/AR haptic feedback, tangible interface design, smart wearable devices, and multi-modal interface design.

We introduce a collaborative manipulation method to improve the efficiency and accuracy of object manipulation in virtual reality applications with multiple users. When multiple users manipulate an object in collaboration, a certain user may have a better perspective than other users at a certain moment, and can clearly observe the object to be manipulated and the target position, and it is more efficient and accurate for him to manipulate the object. We construct a viewpoint quality function and evaluate the viewpoints of multiple users by calculating its three components: the visibility of the object need to be manipulated, the visibility of target, the depth and distance combined of the target. By comparing the viewpoint quality of multiple users, the user with the highest viewpoint quality is determined as the dominant manipulator, who can manipulate the object at the moment. A temporal filter is proposed to filter the dominant sequence generated by the previous frames and the current frame, which reduces the dominant manipulator jumping back and forth between multiple users in a short time slice, making the determination of the dominant manipulator more stable. We have designed a user study and tested our method with three multi-user collaborative manipulation tasks. Compared to the previous methods, our method showed significant improvement in task completion time, rotation accuracy, user participation and task load.