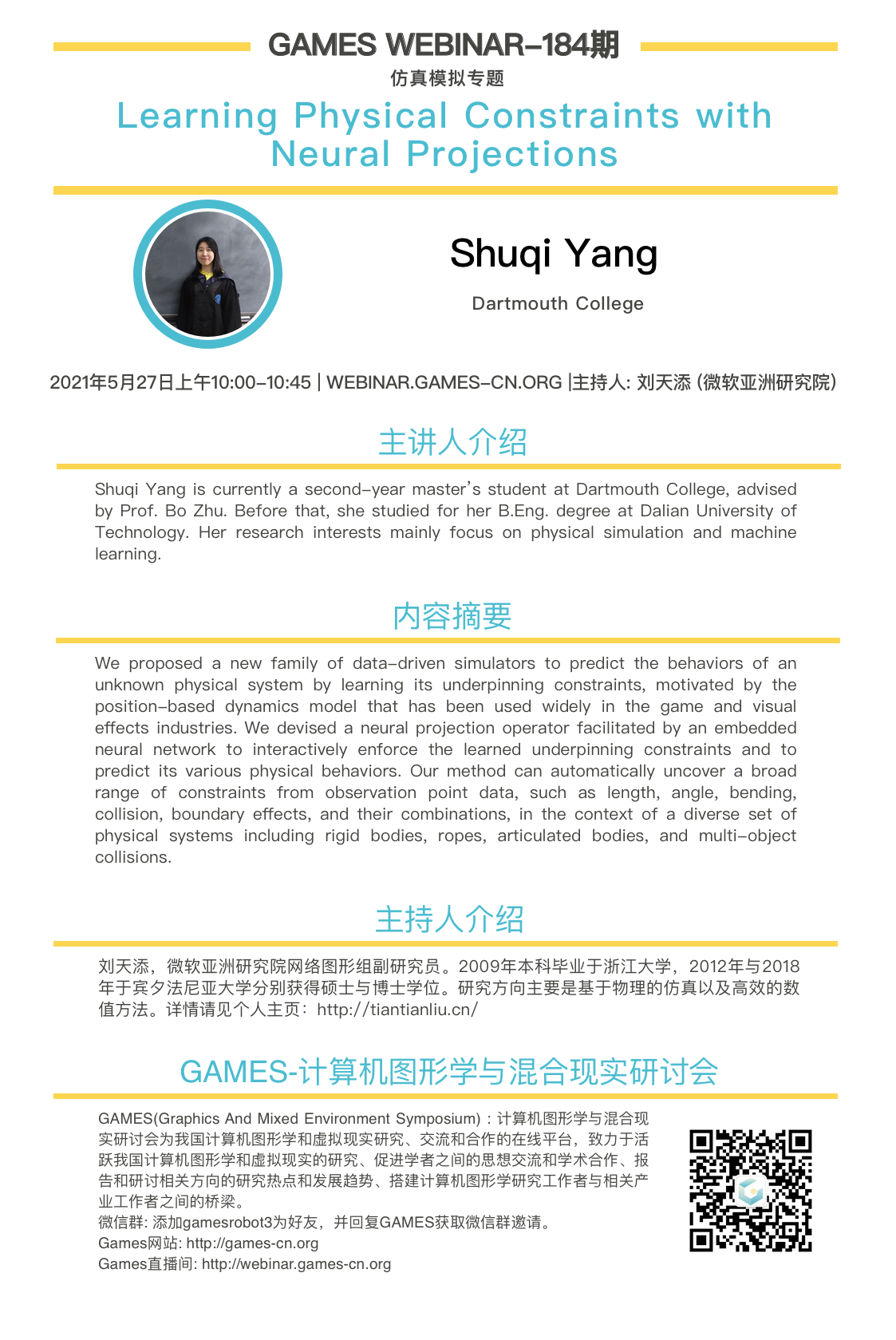 We proposed a new family of data-driven simulators to predict the behaviors of an unknown physical system by learning its underpinning constraints, motivated by the position-based dynamics model that has been used widely in the game and visual effects industries. We devised a neural projection operator facilitated by an embedded neural network to interactively enforce the learned underpinning constraints and to predict its various physical behaviors. Our method can automatically uncover a broad range of constraints from observation point data, such as length, angle, bending, collision, boundary effects, and their combinations, in the context of a diverse set of physical systems including rigid bodies, ropes, articulated bodies, and multi-object collisions.

Shuqi Yang is currently a second-year master’s student at Dartmouth College, advised by Prof. Bo Zhu. Before that, she studied for her B.Eng. degree at Dalian University of Technology. Her research interests mainly focus on physical simulation and machine learning.

Physically based simulation is often combined with geometric mesh animation to add realistic soft-body dynamics to virtual characters. This is commonly done using constraint-based simulation whereby a soft-tissue simulation is constrained to geometric animation of a subpart (or otherwise proxy representation) of the character. We observe that standard constraint-based simulation suffers from an important flaw that limits the expressiveness of soft-body dynamics. Namely, under correct physics, the frequency and amplitude of soft-tissue dynamics arising from constraints (“inertial amplitude”) are coupled, and cannot be adjusted independently merely by adjusting the material properties of the model. This means that the space of physically based simulations is inherently limited and cannot capture all effects typically expected by computer animators. For example, animators need the ability to adjust the frequency, inertial amplitude, gravity sag and damping properties of the virtual character, independently from each other, as these are the primary visual characteristics of the soft-tissue dynamics. We demonstrate that independence can be achieved by transforming the equations of motion into a non-inertial reference coordinate frame, then scaling the resulting inertial forces, and then converting the equations of motion back to the inertial frame. Such scaling of inertia makes it possible for the animator to set the character’s inertial amplitude independently from frequency. We also provide exact controls for the amount of character’s gravity sag, and the damping properties. In our examples, we use linear blend skinning and pose-space deformation for geometric mesh animation, and the Finite Element Method for soft-body constrained simulation; but our idea of scaling inertial forces is general and applicable to other animation and simulation methods. We demonstrate our technique on several character examples.

Bohan Wang is a Ph.D. student in the Computer Science Department at the University of Southern California (USC). His advisor is Prof. Jernej Barbič. He completed He completed a Bachelor’s degree in computer science and engineering from Huazhong University of Science and Technology. He then received a Master’s degree from USC. His research interests are in computer graphics and animation, deformable object simulation, FEM, biomechanics, real-time simulation, geometric shape modeling, and GPU computing.